You can already submit stories on GSS with Images. but those images need to be hosted off site.

I’m opening this to see if there’s interest in having GSS host the images also. This would mean authors would only need t submit the story and its images and GSS would hold them, without the need for a image hosting site link.

Images in stories don’t bother me – I confess I usually click on them. Personally, I use images to inspire characters – but I often post them in discussion threads here on the Forum rather than in stories.

But I support pics in stories.

I was planning to add that for a very long time. It’s a lot of work actually, even though the uploading and storing of images is already implemented (for the profile pictures) I’d have to add a feature that a user can manage his images and has a quota (I couldn’t allow any number or size of images to be hosted, I’m not tumblr), but I also would have to add an easy way to include them in the stories,

I.e. I’d have to add that feature to the editor and Markdown renderer. Both is possible of course, but I need to know that this feature is something people want to see.

While I normally link my pics rather than embedding them, it would also be useful in that case, since I could then link to the internal version of the pic rather than an external link. I wouldn’t bother with it for major sites I link to, like IMDB or what have you, but I’ve had the problem in the past of pics on smaller sites disappearing between one chapter and the next, so I’d probably upload them for those.

Very much interested in this, since I’ll do custom art for the story, etc. Having the ability to directly embed the image would be vastly better for me, and allow me in include NSW images.

I’m not a fan of images in stories, but that just means I probably won’t use the feature.

Quotas kind of unnerve me. I know we can’t afford all the things we want, but I worry about people writing stories with pictures, then going through and deleting pictures from their old stories to clear up quota space. I hope you’d consider a ‘per story’ quota or something like that.

You wouldn’t be able to delete images still used in stories. The system would prevent that. And you’d probably be able to buy more storage space with becoming a sponsor. I think a $3 sponsor would basically have limitless space (within reason).

But in the end I have to pay for storage space. It’s a rather big limit and we’re far away from that, but I have to implement a limit, otherwise people could abuse GSS as their image storage place.

That’s legit fair. I like the idea about having some protection from people deleting images from their old stories, I think that makes a lot of sense.

Isn’t this potentially quite expensive Martin? Unless you scale the quotas according to the level of income perhaps. I know TUGstories went the other direction and banned internal image hosting. They use a standard forum system and people playing forum games were posting lots of images and using all the space.

I’m overly cautious about the use of images that I haven’t made myself, in my creative work (for copyright/legal reasons) so I wouldn’t use this much at all. But I imagine it would be fairly popular. I do have a look at the images people associate with their stories.

Isn’t this potentially quite expensive Martin?

The user profiles were a test balloon to check how big the impact would be. It was actually neglectable. The storage space isn’t the problem, the data transfer volume can be more of a problem. But since I use Cloudflare as a caching proxy now, this isn’t that problematic either.

So I’m pretty relaxed with that.

I will put some restrictions in place, regarding the size of each image, the number of pictures per story and the overall amount of data one person can use. Other than a forum, where people can do whatever they want, I have quite direct control over what happens, that’s the advantage that everything is actually hand-coded by myself

It’s a bit annoying that half of the picture links I click on in stories are defunct, so in that sense I’m all for it. I’d rather not have stories with pictures at all than deal with that frustration. I would appreciate it if people couldn’t embed pictures in their comments though - that would get out of hand quickly.

This has been implemented now!

I’m trying to add a new story with pics, but both in Chrome and Edge (both latest versions) the image editor is greyed out. I was ready to go back to linking URL’s, however that option is within the same image editor. 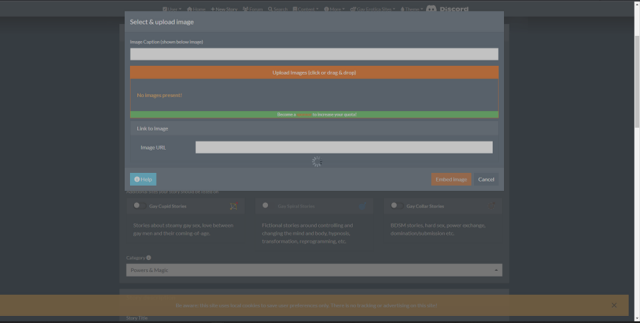 Thank you so much for telling me. I wonder how many people encountered this issue and didn’t tell me.

If someone didn’t have any pictures (not even on their profile), the dialog would crash trying to show the empty list of images. I had tested that, but of course, a late change broke it again.

And tank you SO MUCH for telling me. Guys, if there’s anything not working, please don’t assume it’s you, it’s usually ME who fucked up! And please TELL me!!!

That’s the first time I’ve submitted a story using the new editor, and with your fix, it’s so much quicker and efficient. No more coding for me, and it was wonderful seeing the preview. Previously I’ve had to save it numerous times to check the formatting after accidentally publishing one which appeared as block text, despite my paragraph breaks in word. Not a problem with your new editor. Thanks for all your hard work here