I’ve noticed that there are a quite a few GSS members who also dabble in or even primarily make gay erotica games! (I’m thinking of Cervello, Varlance, BerylForge, etc.) I thought it would be cool to have a place to post stuff that is by community members.

For example, I just released an early version of a collab called HONEYPOT on itch.io! ^^

I’d love to see what games y’all have made!

I just played through one of the endings to your game and enjoyed it very much!

If the theme of such a game would be appropriate for GSS (or any of the other sites I host), I think we could allow it to cross promote them.

I think a short story (doesn’t have to fulfil the word limit) with the link to the game could be posted on the site. If that story gives an impression what the game is about, it might give the game quite a bit more visibility.

Thank you! I really appreciate hearing that! Also just pushed a few minor fixes this morning ^^!

That’s a great idea! Thank you! I’ll think about putting something together.

Hey folks! Delighted to announce the release of Part One of The Naked Blade Dances, The Sheathed Blade Hungers. 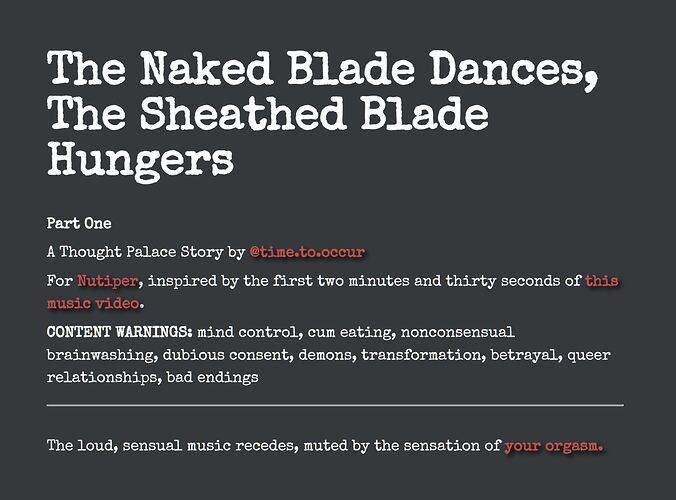 The Naked Blade Dances - Part One by time-to-occur

can you please change the font to something a little more readable? I found it hard to read the longer sections.

Hey there, this is a HTML-5 based game. For accessibility reasons, I’ve provided the download of the source file and you can change the font there to anything you like.

Otherwise, you can right-click and use the browser inspector to make changes!