I’m on vacation in London this week, and I had a funny “only in London” experience today. There’s a gay sauna in Soho I go to–it served as the inspiration for my story “Labyrinth”–and one of the things I like about it is that they have a gym. Well, for a couple of hours on Sundays, they let guys use the gym naked, and on their website, they advertised that “special guests” would also come by on Sundays. So I’m working out naked, and in walks their special guest: porn star Gabriel Phoenix, also completely naked. And it’s a very small gym space, so I’m getting a good view of him right across from me as I do my workout.

He lit me up out of the blue one day to tell me he was in town and wondered if I’d come catch him a buzz before his client arrived?

His hotel was only two miles and too many fantasies away to skip, so I went. I arrived about the same time as his client, so he made the guy wait while he and I smoked on the balcony, which I thought was ballsy.

When he’d smoked enough, he asked me to stay and we had sex while his client watched!

I knew you’d have some good stories to share, absman!

Ummm…sort of, maybe, I don’t know?

I don’t have any contact with the guy, and it’s unlikely he’d have read the story anyway, so this probably doesn’t fit the conditions of the original post. Still, it’s a funny little woopsie that I thought I’d share.

My story, Rehabilitation, was based on a twink I knew IRL who was a friend of my roommate’s. I thought he was hot AF. For lack of inspiration, I used the guy’s name in the story, intending to change it later. Yeah, you guessed it…I completely forgot and released the story with his actual first name, Dakota. Oooooppps!

It’s pretty easy to figure out who RobinHood70 is IRL, and his name’s unusual enough that if he ever read the story and made the connection with who I was, he’d know damned well it was him I was writing about. My understanding is that he was exploring whether or not he was bisexual, but I don’t know where he landed, so he could conceivably have read it.

@RobinHood70 i did something similar in POLLINATION, the SERIES. There’s a group of boys that stumble across my plant and they all have the names of high school classmates.

In APOLLYON, I used real bodybuilders as characters and I did hear from one of the guys in it, Brad Hollibaugh (RIP) and he thought it was “hot”

Literally every character in I Love Him, But… are based on my real life crushes in college. And I think I only changed the dad’s name slightly (real guys name was Joie and I changed it to Joel…real creative there). Rob is my real name and Ryan, Paul, and even Kyra are their actual names

Some scenes of mine have very specific inspirations. For instance, bic12’s FF videos are like the entire reason I wrote Neuro Augmented Massage Therapy series.

The most intense sex scene in my Cognitive Behavioral Therapy series was heavily inspired by John Thomas, most specifically his video with Tim Kruger.

Griffin Barrows was indirectly the inspiration for Magic Mouthwash; I just can’t see his face without imagining him sucking dick, so I was thinking “what if that cognitive association was something you could make other people have about someone” - and bam: a salve that when you put it on a body part makes other people perceive that body part to be very sexual.

Don’t plan on ever telling them in person but if they read this, well there it is.

A number of characters in several of my stories were similarly based on secret crushes that I have in my real life entourage. They may be people from work, or ex-classmates back from my student days. Some I’m actually acquainted with, some are just secret crushes from afar. If their name was generic enough, I’ve just used their name directly a few times, but the more unique ones I would switch to an English name roughly “inspired” by their real names.

The story didn’t need fictionalization at all, yet there I was, adding to it.

I heard from him! It was Dru Bruin! Here’s a pic: 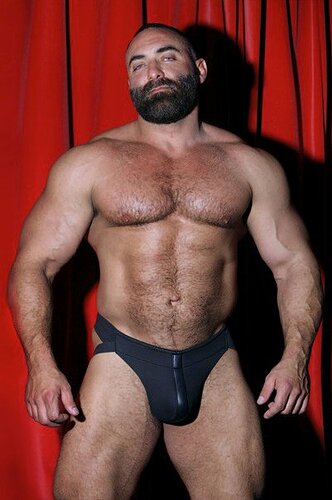 When reading this in my e-mail, the line-wrapping gave part of this a very different tone:

For some reason, “beard” was not the word I’d been expecting at the beginning of the next line.

For some reason, “beard” was not the word I’d been expecting at the beginning of the next line.

I live for the unexpected word.

I’m just thinking it could be fun to do a whole story that way…deliberately using suggestive phrases that turn out not to be the usual phrase.

(Maybe they just come out every few years, like cicadas)

I had inadvertently run into MaelstromX, of the now defunct MaelstromX transformation and pipe/cigar story archives. It was, well, rather unexpected, and he’s one of the few guys I’ve played with in real life who actually understands the weird mental shit that gets us both off. If you don’t know what I’m talking about, these were some of the first sites that hosted this kind of fiction, along with mcstories.com and the earlier iteration of this site, the NCMC. The archives are still on the wayback machine here:

Then, down here in Portland, I ended up connecting with a fellow through Growlr who turned out to be the guy behind Pipebears.com back in the day, who’s now my official Daddy, so at this point I’ve managed to meet a surprising number of folks who shaped my weird ass sexuality, all through happenstance. It’s a small world sometimes.

That’s very cool! I loved both MaelstromX and Pipebears back in the day, even though I’m not into smoking at all IRL. But I loved the mental transformations and emphasis on addiction and corruption.

Wow Maelstrom X’s site was my first exposure to transformation erotica. I still have stories from it saved in text files on my hard drive.